When we visited Stockholm this year,  I was struck by the appearance and the attitudes of people in Stockholm. The stereotypes I often hear about the Swedes are that they are tall, have long legs, blond hair, blue eyes and are good looking. They take extra care of physical appearance, dress fashionably and elegantly. They try to avoid conflicts (or are aloof?), courteous, hence law abiding citizens. They also speak very good English. Though notorious for their drinking habits, they consider driving under the influence is a taboo.

What a divine nation!


I cannot really tell if these stereotypes are all true just from a 3 day observation but it seems that most of them seem to apply to some of the Swedes we saw and met during our short trip to Stockholm.

Real blond hair (not those of peroxide blond as I often see in Vienna) and long legs are easy to spot on here. Yes, people dress really nicely and look elegant, at least in certain districts. Or do they look elegant no matter what they wear, rugs or suits, thanks to their well built bodies? With long legs, healthy complexions, blond hair and good looks nothing can possibly go wrong, can it? Probably so. Young people dress smartly, I hardly saw anyone with green, red or other striking colored hair as I often see in Vienna that had made our Swedish visitors wonder aloud.
Even all the waiters and waitresses at the restaurants we dined in looked quite stunning in their uniforms. And more importantly, they were polite, pleasant and smiling,  didn't look stressed out, harassed, and grumpy. I didn't encounter any unfriendly and rude waiters during our visit. My impression can be superficial of course, and if you find it otherwise, please share your stories with us.

If I was amazed by the quality of the service from the waiters/waitresses, I was even more in awe with the attitudes of their customers. While waiting for our orders that didn't seem to arrive soon in a restaurant near the main station, I saw more than ten people lining up in a queue waiting to be seated.
I noticed something extraordinary right away: NONE of them showed any signs of impatience, nor did seem to mind waiting, even a man with a baby in his arm! And even the baby was well behaved, the little one was not even whimpering! I couldn't believe it! If I were the baby, I would be squealing, whining and screaming my head off! I looked around and saw several waitresses standing and talking to each other, others serving their customers, and one passing in front of the line without sparing a glance. But not a single costumer tried to stop and ask her to please show them to their tables.
"What are you staring at? Why are you looking so bewildered like that?" My hubby questioned me.
"Don't you see those people right there who have been waiting in line for ages? Nobody is calling for the waitress or fidgeting or trying to jump the queue! If I have to wait in line that long every time I go to a restaurant, I'll age ten years in ten minutes!"
Hubby gave me the look and said, "Ah, I see. Patience is not your virtue."

Huh. But yes, hubby is right. Patience is not my virtue.
It is, I think, not surprising since I have been living in the second district in Vienna where patience seems to be an alien concept to some people: I have been shoved several times while trying to get off an overcrowded underground, shouted at by several elderly people for not flying down the steps of a tram fast enough. I often overheard people screaming at each other in the supermarket because one person tried to jump the queue. It happened to me yesterday, while waiting in line in a shop,  a woman suddenly came up to me and positioned herself in front of me, coolly saying, "I only buy a couple of things, may I?" What should I say and do? Noticing her belligerent look, I could only sigh. No need to quarrel over a trivial matter, right?


Sure, though I have to admit that I can be very nasty too when I am in a foul mood. Sometimes I intentionally rolled the wheels of my trolley over some passenger's toes when this impatient creature tried to push me aside while getting on the underground. "Oops, Sorry!"I would say which actually meant 'Hah! You deserved it, you scoundrel!' 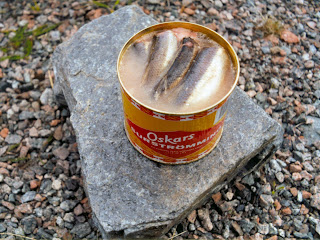 In Stockholm I never got pushed nor shoved while waiting in a queue for a tram.
Passengers talk quietly to each other, nobody eats anything like pizza or Leberkäse (or maybe in their case Surströmming,
the fermented sour Baltic herring
that allegedly produces the most putrid smell in the world) in the underground, puts up their long feet on the seat, talks loud into their cellphones. I also realized, people take their time and are civilized to each other, at least when they are sober. I don't know if they still maintain their composures when they get drunk. I heard that Swedes really like making longwinded speeches when they are drunk. Here is an anecdote featuring these particular habits:

Before sentenced to death, a French, a Swede and a Norwegian prisoners are granted their last wishes. The French man asks for a 3 course meal and a cigar, the Swede wants dinner AND of course, makes a speech. Hearing the Swede's requests, the Norwegian pleads for an earlier execution before the Swede has a chance to open his mouth to have his speech!

What a story, I wonder if the speech part is true. It is hard to imagine how composed, quiet Swedes react when they binge drink, especially after having seen how the waiting costumers thanked the waitress in a very polite way for leading them to their tables!

So out of curiosity, while standing in a queue in a self service restaurant, I asked a woman standing next to me whether this 'phenomenon of waiting' really existed and whether it also happened in other cities in Sweden. She and her friend laughed, confirming that indeed it was the case, and added in good humor in her excellent English "You are right. We, Swedish people don't mind waiting. We are a bit stupid, you know.." I laughed at her joke and thought, "People here are very nice. Are they also nice to foreigners living in their country or only to tourists?"

Sweden, the dream nation?
Or am I wrong?

PS: I am looking forward to any comments on the article so that we in Austria especially can learn more about the Swedes and not just associate them with Astrid Lindgren, Roxette or the Vikings.

As a Swedish I'm very proud of your description! Glad that you enjoyed in Sweden. Welcome back! And will not tell you that Swedes can be whiny and annoying. ;) At the moment I live in your wonderful city, Vienna.
Just Love it!!! (and Yes, I´ve noticed the colorful hair :-)

Hej, really nice post. That's exactly what I experienced so far in Sweden and I visited the beautiful city of Stockholm 28 times in the last 6 years!

I really enjoy beeing in Sweden with all the friendly people, the awesome mix of big city and a lot of nature.

And even if you are far away from the typical tourist places, you will experience the same.

That's why I love it and hope to move to Sweden. ;)

I've always admired Scandinavian people and their way of living.. There is just one thing that crosses my mind every time I start to seriously consider moving there and it's the very same question this authoress puts at the end of the text - "People here are very nice. Are they also nice to foreigners living in their country or only to tourists?" :)

I also have very similar experiences and only can add a positive comment about the country.
This Summer I was in Helsingborg and was just wondering if all Swedes are so kind, smiling and helpful. :)

As a recent immigrant to Stockholm, I found your blog post an interesting read and have observed all that you wonder about.

I have posted an excerpt of your article in my blog linking it back to yours.

Thank you Candra! It was a beautiful article that we will love to share as much as we can of course. Best regards and welcome back!

Your description of all these well-dressed and well-groomed people, all smiles & patience, knowing their limits and never getting out of line sounds somewhat eery to me. It reminds me of the Trueman story and other gloomy tales. Is their any space for individual expression if everybody is so well-behaved?
I feel more at ease hearing words of anger or experiencing occasional bad behaviour than moving among people constantly well-tempered. Of cousrse, you're talking of first trip holiday experience, but it makes me imagine and think of Vienna's outspoken moodiness in a warmer light for a change. Thank you for your account, cahaya!

Interesting, except for the blond hair, a lot of the things you noticed about the Swedes are also things that other people notice about Austria and Austrians (as you can see from that one comment). Da sieht man wieder, wie subjektiv halt alles ist.^^